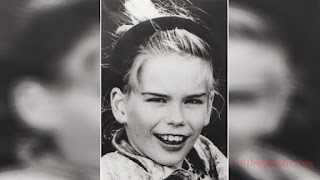 Claudia Ruf was an 11-year-old boy found in 1996 to be sexually assaulted and assassinated. No one was convicted of her murder.

He was 11 when he was abducted in May 1996 while walking a neighbor’s dog in Grevenbroich, about 13 miles from Dusseldorf.

When the dog returned home, her family became worried, but he didn’t. Two days later, more than 40 miles away, Claudia’s body was found. Until her body was doused with gasoline and charred, he had been raped and strangled to death.

Posters were placed on buses and trains, pamphlets were delivered by police, and a reward was offered for finding the killer of Claudia but without success.

In a new attempt to track down the perpetrator, German police asked 800 people at the time of Claudia’s death between the ages of 14 and 70 to give a sample of saliva.

Officers say traces of DNA have been identified on the body of Claudia and they are hopeful that the testing will locate her murderer.

There’s a big chance to solve my daughter’s sad fate after more than 23 years, and he’s been quoted as saying by AP. The perpetrator was able to hide behind us all for too long.

A police spokesman told Bild newspaper that their renewed attempt to settle the case, including thousands of tips, had shown a great deal of interest.

Men over 14 years old were invited to participate in DNA testing at the time of her death.

Hopefully, it will find the guilty. I’ve read a lot about the wrong case, of course; the newspaper quoted him as saying.

The lead investigator on the case, Reinhold Jordan, told German media that it would take four to eight weeks to examine the artifacts.

Police tested 350 samples of local DNA in 2010 but did not make any progress.

According to German media, researchers hope they will be able to use a recent change that allows closely related samples to be flagged in results from relatives.